Rapid Tranquillisation (RT) is defined on this website as

The use of medication to quickly reduce heightened emotional states such as agitation, aggression, violence or acute behavioural disturbance or the relief of distressing symptoms for the person.

Other definitions exist for RT the most current of which include

Use of medication by the parenteral route (usually intramuscular or, exceptionally, intravenous) if oral medication is not possible or appropriate and urgent sedation with medication is needed.
NICE 2015

The associated term ‘rapid tranquillisation’ refers to intramuscular injections and oral medication. Oral medication should always be considered first. Where rapid tranquillisation in the form of an intramuscular injection is required, the prescriber should indicate the preferred injection site having taken full account of the need to avoid face down restraint.

Worldwide most mental health providers, for example, seem to refer to these definitions and some Australian policy documents appear to quote the older 2005 NICE guidance (now replaced by the above 2015 NG10 NICE document.

Depending upon your clinical setting the route of administration may include 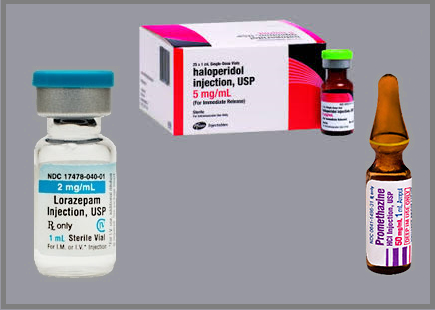 sometimes given with an antihistamine usually

and also separately or in addition to benzodiazepines such as

This wide-ranging combination of prescribing is seen internationally when reviewing literature, in the UK NICE guidance gives practitioners a more limited choice initially of Lorazepam, Haloperidol and Promethazine.
(Our free RT flowchart is based on this.)

As the use of RT is frequently given coercively, then the practitioner must satisfy themselves that they have considered the legalities, professional guidance and ethics of its use. This is in addition to the normal requirements of staff administering any medication.

Following the administration of rapid tranquillisation professionals must continue to interact, observe and support the person and document and record the event with the person and plan future improvements/changes to their care and support. This process should include 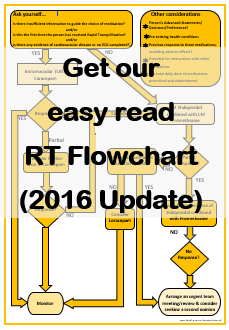